Romina Johnson known for the monster garage hit “Moving Too Fast” remixed by the Artful Dodger a uk number 2 chart penned in the year 2000. Romina was born in Rome, in 1973 into a musical family.

In the 1960 her father left the United States to travel the world to pursue his career as a musician. He started as a bass player, and by the 1970s was an accomplished solo singer, well known in Italy and throughout Europe, having sold over 12 million copies throughout his recording career. 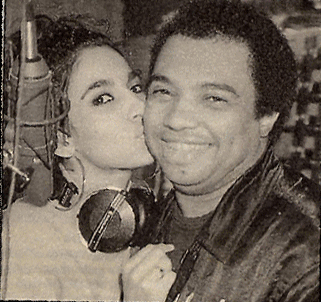 Romina’s parents were both avid music lovers who’s music collections contained many genres, including Soul, Jazz, Funk, and R&B. As a result, songs by artists like Otis Redding, Aretha Franklin, James Brown, Anita Baker, Stevie Wonder, Chaka Khan, The O’Jays, Earth Wind & Fire and Prince (just to name a few) were among her earliest influences… and so even from a very young age, Romina knew that she wanted to become a singer too.

By age 12 Romina had begun touring part time with her father as a backing singer. By age 20 she’d joined a band called “Second Floor”, and signed her first deal with Rossiter Road. There she recorded her first EP… then a duet single with her father entitled “Love and Happiness”. Then in 1998, she recorded her debut solo album entitled “Simply Passion”, which included the original [pre Artful Dodger] version of “Moving Too Fast”.

After having a mojor success with her hit single Romina released her second album “Superbad” in Europe & Japan and performed over 90 dates in the uk including london famous summer festival “Party in the park” sharing same stage with artists such as Cristina Aguilera, D. Child,Lionel Ritchie and many others…Today Romina is considered to be one of the UK most rated underground soul vocalist and her long list of recordings goes from R&B/Soul to Dance/garage music. Over the years she had the pleasure to collaborate with international DJs like “Bini and Martini, Caludio Coccoluto,Dino Lenni,The Artful Dodger and George Morel” ..Also she worked as a session singer with artiste such as the “Spice Girls,MikeFrancis,Us3,Odessey,and Mika”.. From 2002 Romina has been fallen back under more soulful wings, featuring on “D-influence” d-vas album together with artists such as Ultra Nate, Shola Ama ,Dee C lee and others… Another soulful project released by Dome Records “the colour of my soul” Romina shared with the likes of Carleen Anderson,Cece Peninston etc.

Then in 2005 the single “What can I do” on the “London Soul compilation”sponsored by Adrian Gibbs which again features the cream of uk and international soul performers such as Omar, Angie Stone, Terry Walker, Lewis Taylor, Don-e etc. May 2008 “Soul River” was her latest Japanese release that received a lot of love from “soul lovers” radio and media world wide.Over the years Romina has appeared on “Top of The Pops”,“Cd Uk, “Top of the Pops live in Sheffield” and recently in 2011 she appeared on “Never mind the buzz Cocks”.

For more info about Romina’s discography please visit her entry on Discogs.